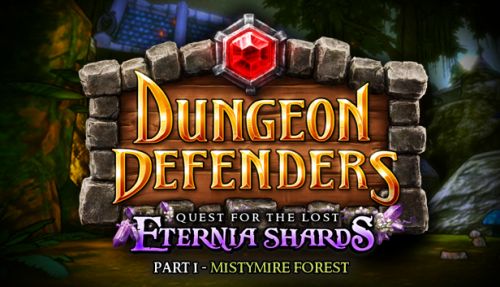 We'd like to say that we are somehow precognizant and plan certain things using that incredible knowledge, but sometimes fate just has a way of working out in our favor. Just in time for our latest co-op night, the fine folks at Trendy Entertainment, developers of tower-defending, action-RPGing co-op hit Dungeon Defenders, have released a new piece of DLC that hits Steam today. Titled "Quest for the Lost Eternia Shards," the latest in a string of PC DLC adds more than just a few new character skins and weapons. This time, new missions and challenges have been added as well in what is the first of four such add-ons that will take the young heroes out of the castle and into the lands of Etheria itself. Best of all, this DLC will soon be seeing an XBLA and PSN release as well. A trailer for the DLC and more can be found after the break.

As part one of the Quest for the Lost Eternia Shards, gamers everywhere can now finally take their first look outside of their castle and into the rest of the vivid Dungeon Defenders universe.

Each quest will take players through an entirely new campaign map, a new PvP map, and a new challenge mission with new story cinematics, enemies, 10 all new weapons, a new pet, a new boss, and more! When gamers complete the quest, even more secrets may await.

The new DLC will only set you back $3.99, but for today only you can pre-order the remaining DLC packs and also get early access to a new "Nightmare" mode that ramps up the difficulty to an even more outstanding level. For all you console gamers, the Mistymire Forest DLC will be available for the same price point starting next Wednesday, December 21st.

So in case you skipped over all of that and jumped to just this point, let's do a quick recap:

If you still need convincing, here's a trailer for the new DLC. See you all tomorrow night!