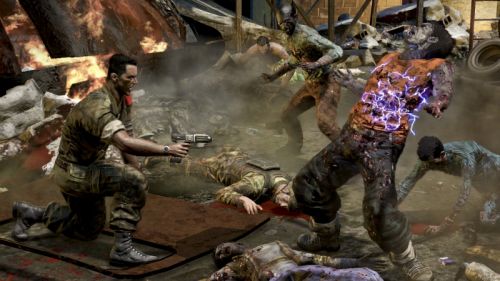 Crap.  This is very disappointing.  The new Dead Island DLC, "Ryder White's Campaign," will be a single-player-only affair.  The new add-on will allow you to experience the zombie disaster of Banoi as, you guessed it,  Ryder White.  If you haven't finished the game, you may not know too much about Colonel White.  Let's just say he's another survivor of the undead outbreak and he's trying to help the four survivors from the game's main story line.

I'm more than a little bummed that this mode is a solo experience.  Logistically, I understand what they're trying to do, but I'm still a sad zombie stomper.  The co-op play in Dead Island was great, and during the more difficult encounters, completely necessary.  I was hoping that Deep Silver could have tossed in some generic military characters for us to co-op with, but alas, this is the story of one man.

The new DLC will include several hours of gameplay, as well as blueprints for two new weapon mods.  We asked Deep Silver if Col. White would have a skill tree.  Aubrey Norris, their evil PR Tarantula Queen, broke it down for us:  Ryder White does not have a skill tree and he won't level up because he's an army colonel.  Which means he's "already a proper badass." Since the DLC isn't nearly as long as the campaign, there wouldn't be much room for skill progression. What do you think, folks?  I know we focus on co-op here, but we want to know your thoughts on single player DLC for a game that was based around a co-op experience.  Was the story strong enough for you to justify a single player adventure?  Do you plan on picking it up?  Would you purchase this if it had co-op?   Let us know what you think!