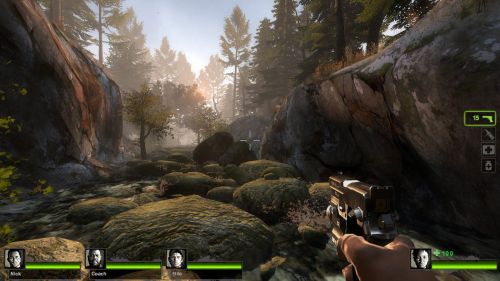 After months of play-testing, Valve has issued one of the most significant patches to the “Cold Steam” campaign and remaining Left 4 Dead maps. As the full DLC is scheduled to be released on the PC version of the game very soon, Left 4 Dead 2’s newest campaign additions are looking to accommodate the main differences of L4D2 from L4D as smoothly as possible.

Here’s a list of updates for all of you Steam users out there!

- Added game event calls for onslaughts to explain to players that they need to fight their way to the safe room.

- All maps received minor tweaks and bug fixes, the significant changes are listed.

- Switched out L4D2 mounted gun for the L4D1 minigun.

- Removed exploit where survivors could get onto a roof near the drop down to the river.

- Switched out L4D2 mounted gun for the L4D1 minigun.

- Removed exploit where survivors could jump onto the top of a generator during the finale.

- Removed "shortcut" through the bushes between a pair of barricades leading to the barrel explosion event.

- Added tooltip to prompt players to fight to the safe room when the onslaught begins.

- Tuned the horde numbers back a bit during the onslaught event.

- Blocked ability to get under the river.

- Rebuilt catwalk under the bridge to prevent players getting caught on geometry.

- Removed ammo pile in the shop just before the junk yard, but kept the weapons.

- Added some light cover for the tank in the basin area.

- Removed survivor manhole exit into the second half of the map.

- Added side-hall in the sewer as a shortcut for infected players going to the second half of the map, and as a strategic place to spawn in the sewer.

- Added new truck depot area near the tower for infected to spawn in.

- Opened a warehouse door for infected to spawn in.

- Rebuilt stairway up the finale tower to prevent players getting caught on geometry.

While Xbox 360 users patiently (and when I say “patiently”, I truly mean it) wait to dive into the up-and-coming "Cold Stream" DLC, which will include all newly updated L4D maps and community map “Cold Stream”, the PC side is continuing to make sure that all of the bugs are worked out before the 360 world can get their chance. For all the 360 users still making “Dark Carnival” their home Versus campaign, please hang in there. It won’t be long until your L4D2 map library is greatly expanded.