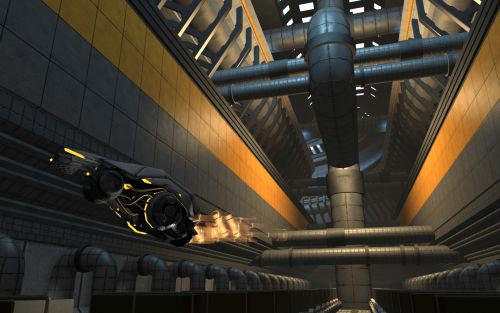 It was just before Thanksgiving and the holiday season hit that we announced Cadenza Interactive's next co-op title, Retrovirus. Described as a "six degrees of freedom" shooter (think Descent) with a full-length co-op campaign that places players into the roles of an antivirus program out to save its host computer, the game is a complete departure from their initial debut into the world of co-op games, the action-oriented tower defense Sol Survivor. Thus far, there hasn't been too many details on Retrovirus or what that "six degrees of freedom" gameplay will look like, but Cadenza has just announced that they'll be demoing the game, live, tomorrow night. What's more, they'll be conducting these live streams on a regular basis going forward as a means of hearing from, and interacting with, the gaming community as a whole.

Starting this Wednesday, January 25, at 6:00 pm PST (9:00 pm EST), Dylan Barker, Cadenza's Game Designer and Community Manager, will be running a live stream at own3d.tv focusing on Retrovirus' gameplay, its level design tool, and much more. The stream will conclude with a Q & A session where you can ask Dylan questions about the game and even provide some input into what you see. This will be the first of many such streams, and we certainly are excited about the opportunity to not only get a glimpse of this upcoming title, but to also let our voice be heard!

Full details of the stream from Cadenza's press release:

SANTA ANA, Calif. -- January 21st, 2012 -- Cadenza Interactive, the studio behind Sol Survivor, today announces the beginning of a live Retrovirus development stream series on own3d.tv. Retrovirus is a six degrees of freedom shooter that pits players as antivirus programs against a rampant viral infestation inside a stylized software environment. The game is to be released initially for PC.

The first stream will focus on previously unrevealed gameplay mechanics, environment design and a behind-the-scenes look into how Retrovirus is being made. Over the weeks following, the live stream will feature segments on the game’s progress, game design topics specific to Retrovirus, and of course, live gameplay sessions.

Each episode will be available after the live broadcast as video on demand via own3d.tv for users unable to join the live session.

Game developers getting feedback about their games is certainly nothing new, but new or not, gamers should take advantage of every chance they get to make their voice heard. Hope to see, and hear, you at these live stream events!