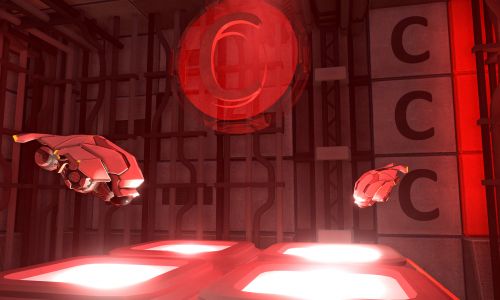 Not every Kickstarter campaign sees it way to fruition. Such was the case, sadly, for Cadenza Interactive and their six-degrees-of-freedom cooperative shooter, Retrovirus. For some of these campaigns, that's the end of things - the game/movie/album/book will never be and the people involved move on to the next thing. For Cadenza, it was simply time to move on to the next plan. As Dylan Barker told us when we spoke to him last month just prior to the campaign's conclusion, Cadenza had some other plans in place to help see them through should the worst occur. Turns out, those plans were to find a major distributor.

Gamestop may not always have the best reputation due to their pre-order/exclusive bonuses and the politics involved with buying and selling used games, however, they are still a valid option for many gemers out there from which to purchase their games. As such, Cadenza has been working with the traditionally brick-and-mortar store to get their latest alpha build into the hands of more people via Gamestop's relatively new digital distribution platform, Impulse (yes, the same Impulse that once belonged to Stardock). The alpha is exclusively available on Impulse, for now, and features:

...about 20 minutes of single player content, plus two "challenge" maps that are replayable for high scores. Multiplayer contains the Deathmatch, Team Deathmatch, MOBA and Domination modes. Co-op is still in the works, but... the entire 20 minute campaign demo stretch [can be played cooperatively]

According to Dylan, the alpha is downloaded through Impulse but it runs entirely separate from the Gamestop client. They would like to have the game be available through Steam down-the-line and are already striving to ensure that the multiplayer and co-op aspects will still work with Valve's platform. If you missed the alpha through the Kickstarter, this is a great chance to pick it up!