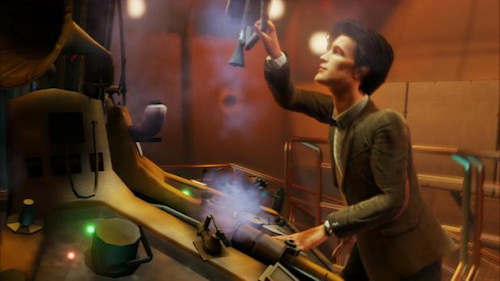 Doctor Who fans rejoice!  The Doctor and River Song will be teaming up in an action/platformer on the PS3, Vita and PC with an all new story written by in colloboration with the BBC Wales team.  Doctor Who: The Eternity Clock will feature both Matt Smith (The Doctor) and Alex Kingston (River) who are lending their voices to the game which takes place across four separate timelines in London.   Your little blue police box  will take you into the Elizabethan, Victorian, and present eras as well as traveling to the future.

The Unreal Engine 3 powered game looks to offer some pretty big fan service with enemies including the Daleks, Cybermen, and the Silence all being featured.  Music is being composed by Murray Gold who is responsible for much of the music in the modern Doctor Who reboots.  Gameplay seems to be a solid mix of action, platforming and puzzle solving as well.

Right - so what about co-op?

While details are still sketchier than shadows in a library, we do know the PlayStation Network version of the game will support split-screen co-op play.  It's unconfirmed at this point if the Vita version or PC version will support this feature.  We do know the Vita version has a lot of cross platform features like cloud saves to allow pick up and play on either PS3 or Vita and Near support for a medal collection mini game.  Perhaps cross platform co-op could be included too?

The PS3 and Vita version should be available this March with the PC version coming shortly after.  Here's a trailer that's sure to get you pumped for the game.