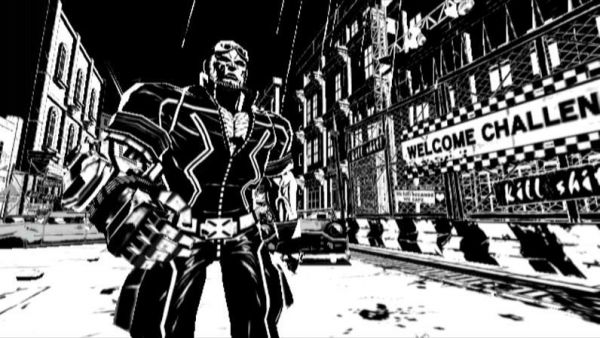 Two of the three colors in MadWorld. Not pictured: Red.

Platinum Games, the makers of MadWorld, Vanquish, and Bayonetta, have a new project in the works.  Subtly titled Max Anarchy, gamers can expect more of the extreme, over the top action that was so prevalent in Platinum's previous entries.  Producer Atsushi Inaba says the game will be creating its own genre. Andriasang.com translates the proposed genre as a "Massively Multiplayer Melee Fighting Action" title.

Specifics are yet to be determined, but there will be "co-operative elements in addition to free-for-all combat." When asked to describe the combat, Inaba said, "fighting game."  One clue as to the game's style comes from the revelation that Jack, the main character from the ultra violent MadWorld, will be a playable character. According to Inaba, "...he fit Max Anarchy perfectly, even though he has nothing to do with the game's story and world setting."  So...that clears up nothing.  We should have more details in the coming months, as Max Anarchy is slated for a 2011 release for the Xbox 360 and PlayStation 3.