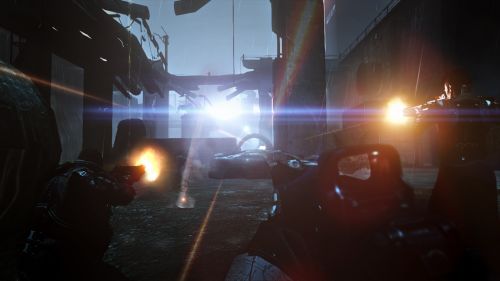 The spring gaming season is well underway and we've already seen a slew of co-op game releases, like Binary Domain, Journey, and Shoot Many Robots, where cooperative gameplay was a focus for the game from the start. Yet we've also seen some major AAA releases, like Mass Effect 3, hit store shelves where the addition of a multiplayer component is something new for the series; or an existing series, such as The Darkness II, swap it's formerly competitive multiplayer mode for a strictly cooperative one. Finally, you have the revival of older games that have had their format completely changed - leaving them ripe for the traditional player vs player multiplayer style to which we've grown accustomed - and still maintain the co-op gameplay (we're looking at you, Syndicate).

Ok, so what's the big deal? More games have co-op. Mission accomplished! Celebration in the streets! All of this certainly is reason to celebrate if you're a fan of co-op gaming, but it's also a potential "sign of the times" for gaming as a whole. As one video game writer recently mused, "is co-op the new deathmatch?"

The fact that so many co-op games are popping up these days, and so many more are on the way, is a trend we noticed back in 2009 while celebrating the site's one year anniversary. Since then, our games database has grown to over 1,927 co-op games, and we've heard from more and more developers about how they're bringing co-op to their games. So this "trend" appears to be gaining quite a bit of substantial ground; to the point where other writers and sites are taking notice. Is the addition of Mass Effect 3's co-op mode a response to gamer demand, or the many socio-economic factors we face?

Christopher Floyd, of videogamewriters.com, recently mused (briefly) on this shift in multiplayer dynamics away from the competitive side of gaming to the cooperative side. As he writes:

A few years ago, your typical game contained a single-player campaign, and a multiplayer that would allow you to use what you had learned in a fight to the death against your friends, or even folks you had never met. Deathmatch was the traditional approach to a multiplayer component: an all-for-one, one-for-all high-stakes battle for honor among your peers. It is interesting to me how times are changing.

Christopher goes on to cite Syndicate and Mass Effect 3 as just two cases of games where there was a conscious decision on the part of the game developers to not include a competitive multiplayer mode. But why, he muses. Why this sudden change in the multiplayer gaming landscape? Are people tired of shooting one another? Excitement, and sales numbers, around long-standing competitive multiplayer franchises like Battlefield 3 and Call of Duty would certainly seem to shoot that argument down (though, in all fairness, these games do include co-op modes of their own). Or, as Christopher asks:

Has a climate of financial austerity encouraged us to team up, to work together and improve our situation? Are game developers doing nothing more than simply holding up a mirror to a contemporary society in the throes of improving its sense of community?

What do you think, fellow co-op enthusiasts? Has the sudden shift we've seen in more co-op games a result of the current economic/political/social states we find ourselves in, or is it in more response to something as simple as major gamer demographics getting older and wanting different experiences than when they were younger?