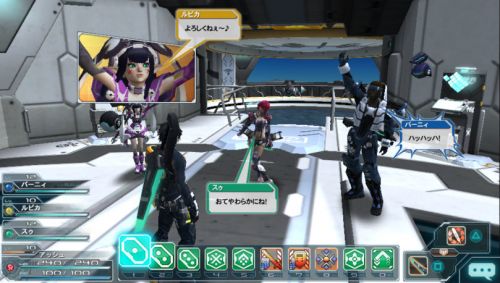 Just when you thought things couldn’t get any better for Phantasy Star Online 2’s future, Sega surprises us even further, announcing that we’ll be able to take the game with us on the go in more ways than one.

PC and Vita players will soon be sharing the Phantasy Star Online 2 universe with the Smartphone gamers of the world as well, as Sega announced that it will be arriving on both the iPhone and Android Smartphones come next fall!

The Smartphone versions will offer simpler character creations and control experience, all with the idea of social gaming in the front of their minds. Sega wanted this version to make you feel like you are connected to the game on a more “personal” and “simpler” level comparated to the other two versions. While the PC/Vita versions offer cross-platform play, the Smartphone versions will only share data with the other two. Hopefully, we’ll see some truly breathtaking graphics and gameplay come out of the Smartphone versions, because who wouldn’t want to play this game cooperatively with their friends all day long? Sure sounds like it will be a much more satisfying multiplayer than Scramble With Friends would be any day of the week.

One other thing I figured I'd mention is that this game will be available to free to play! The only catch here is that certain game items and purchases will cost you real life cash instead; it’s a very similar system to what World of Warcraft has been doing, which seems to be working as a viable way to make money with an online game and still attract people to play. While this might sound like a bit of a turn-off, a free version of one of the best online game series' of all time shouldn't sound like a bad deal at all, right?

The PC version of the game will become available first with services starting in the summer (so don’t get too bent out of shape, PC gamers), followed up by the Smartphone by fall 2012, and then finally the Vita version finishing up next spring. Mark your calendars!