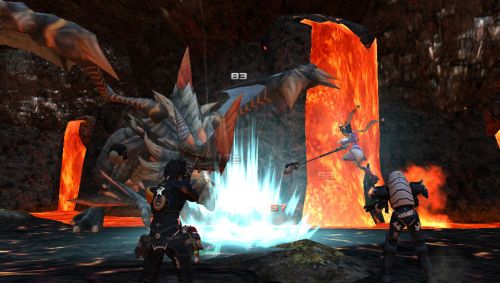 Phantasy Star Online 2 is coming to both Vita and PC (in Asian markets). The PC game is currently in the alpha testing phase, with the final game expected in 2013. While story details are still under wraps, we do know something about the combat. It's much faster and more fluid than previous games in the series, with an expanded combo system and the ability to jump. Ranged weapons now have an over-the-shoulder targetting system that should make them more pleasant to use as well.

As for the Vita port, it's only about ten percent complete. Current screens looks a bit rough, but SEGA aims for visual parity between the two versions. PC and Vita players will be able to share the same servers as well. The Vita version has not been officially announced for English markets (the PC version is a definite no), but considering that past portable versions have made it over here, it seems likely. Even without a domestic release, Vita cards are region free, so importing would be an option. The only thing I'm left wondering is why the heck hasn't SEGA announced Xbox 360 and Playstation 3 versions as well?

As we wait for more details and dream of console ports, check out this first footage of the Phantasy Star Online 2 in action on the Vita: