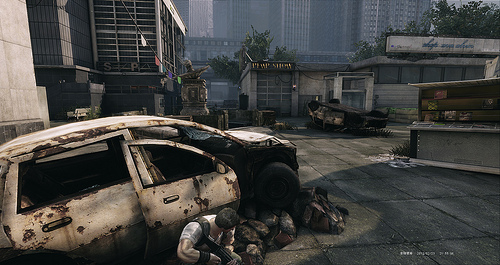 We've been sitting on this story for a while, trying to dig up details on it, but alas we've only got a little bit to go on.  Epic Games' China group is developing a 3rd person shooter on the PC aimed at hardcore gamers utilizing the Unreal Engine 3.  The game is called Mercenary Ops and it'll feature both competitive versus and co-op gameplay.

What we do know is the game is set in a near post apocalyptic future where weather affects the gameplay at every turn.

The weather effects such as blizzards and snowstorms helps facilitate this aggression as well. Because the particles are so blinding in these levels, it’s hard to shoot foes. Players have the opportunity to quickly advance instead. They can rush up in the blizzard that makes them invisible and go in for the kill.

Another big factor in gameplay is the physics system which governs not only how players react to the environment but how bullets react to things like wood, metal, stone and...flesh.  Of course all that means that  a cover system is going to be utilized for Mercenary Ops "fast aggressive play."  Admittedly this all sounds pretty standard.

But here's the kicker - the game is promising a co-op mode for 16 players.

At least, we think there's 16 player co-op.  We're trying to nail down exactly what the cooperative modes will be and how many players it will support.  Mercenary Ops is supposed to hit sometime this summer so we should know those details soon enough.