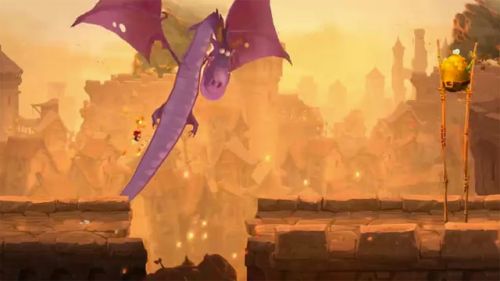 I have no doubt in my mind that the widely praised platformer title, Rayman Origins, will be getting a well deserved sequel in the future. From a few screenshots taken from a marketing survey, the type of game the sequel will be like has seeming been hinted at. So far, it looks like it involves a vast world including Greek gods and dragons, both of which are equally viable in a formula for “awesome”.

Ubisoft has stated that Rayman Origins has made a good impact on the company’s profits, also receiving positive reviews from most news sources. But where should Rayman go from here? Ubisoft has to be careful on taking what it has established from Rayman Origins and tweeking it to appeal to the consumer once again. In my opinion, dragons and Greek mythology should do nicely. Kotaku picked up the images sent to them from an anonymous tipper, who supposedly “stumbled” on them when taking a survey from Arkenford (a marketing firm that is a client to Ubisoft).  From the pictures themselves, they allude to the game including four-player drop-in/drop-out gameplay like the first, as well as swapping the original’s “fairy” world for one that seems more familiar to us.

While this does seem promising for us, the images could add up to absolutely diddily squat if they aren’t real. Why? Because a couple of things:

2). Fans of any series will get Photoshop happy. Simple as that.

To solve this mystery, Kotaku has contacted Ubisoft about the images and their authenticity, but we’ll have to sit patiently and await a reply of some sort. In the mean time, however, why not take a look for yourself at the images featured below and comment to us below on your opinion.  Also, give them a reason to want to create another sequel and look into trying out Rayman Origins for yourselves. Like I said, it did pretty well for itself, so don’t feel scared about adding it to your game library.