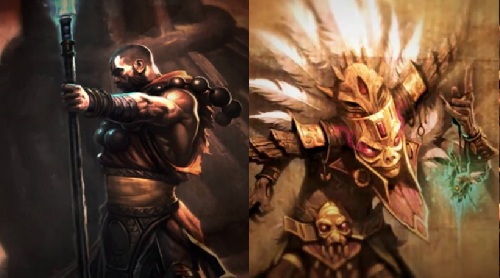 Did everyone get to play the Diablo 3 public beta last weekend? Good times, if you could get into a game. Those servers were packed! Oh well, that's the nature of a stress test. I only had time to play with one class, so I suited up a Barbarian. After seeing these two guys in action, I feel like I missed out. The Monk and the Witch Doctor both have some very cool skill sets.

The Monk is a bald, bearded melee fighter. He uses spirit energy to power his special combo moves and party-buffing mantras. You can read more about him in our Co-Op Character Focus. The Witch Doctor looks positively wicked. He uses mana-boosting armor to increase his magical abilities. He has all sorts of nasty tricks, the most impressive is his ability to summon other creatures to fight by his side. You can find his Co-Op Character Focus here. Check out the following videos to learn more about them.

Diablo 3 supports four player online co-op. It's long-awaited PC launch is scheduled for May 15th. What class will you be rolling?