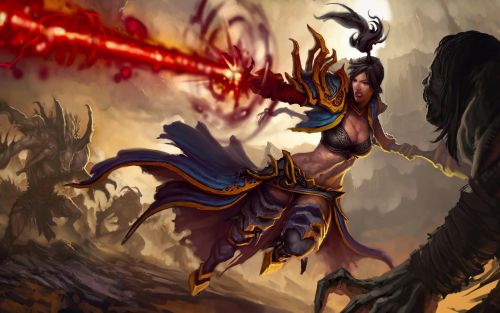 Just two weeks away before Diablo III’s release day, scheduled for May 15th, Blizzard has continued to reveal character class information on their website. Next in the sequence comes the Wizard character class, having yet another epic trailer aimed to get you even more pumped to play The Wizard’s strength lies in its ability to use “Arcane Power”, allowing it to wield destructive spells to decimate an opponent or use defensive ones to escape harm and render enemy attacks useless. To use this character class to its maximum potential, players will need to have great skill and knowledge of the Wizard’s magical abilities, as well as good management of their Arcane Power usage. This character can shine as either an attacker or support class, but if you need some other reasons to pick the Wizard for your character, here are a few taken from Diablo III's official site:

Wizards claim dominion over the natural elements of Sanctuary. Crackling flames, bolts of lightning, blasts of ice and whirlwinds are at their command, and this versatility enables them to target foes’ weaknesses and bypass their defenses.

The battlefield is covered in the forces summoned by a powerful wizard-cones and blasts that hit large groups of creatures at once, rays that punish them for standing close together, and falling rocks that crush those who idle.

Though not as physically agile or strong as some other heroes, wizards cloak themselves in defensive magics. They can encase their skin in diamonds, create mirror images to befuddle their enemies, and harm or slow those foolish enough to strike at them directly.

Wizards rarely find themselves without the power of magic. They can nearly always afford to cast their weaker spells thanks to their swiftly-regenerating Arcane Power, and they invoke certain power more easily as their experience grows.

Now, without further adieu, take a look at the Wizard trailer debut for yourself and drool a bit:

Be sure to check out our other Diablo III character class breakdowns, such as the Barbarian and Demon Hunter, If you’relooking for additional information on the Wizard class, Diablo III’s official website can also help you out easily.