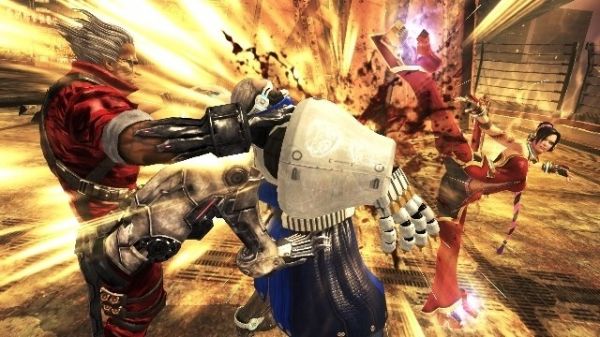 Earlier this week we brought you some crazy videos featuring the three Rin assassin sisters from Anarchy Reigns. Today, we have two dozen more screens from the multiplayer fighting game. Most of the game's impressive roster is well represented. Jack Cayman and Co. are dishing out pain by the bucketload. I don't know what's happening in the header image, but Durga's mechanical foot looks like it means business.

One screen in particular shows 16 players and what appears to be some sort of ability system: Yup, I count 25 unlocks and 16 players. Battle Royale mode indeed. What the heck is the ability system all about? We'll have to wait until July to find out the details. Here's a video featuring some "interactive" environments to add to the confusion.

I guess it's not that confusing. It's pretty clear the stages are trying to murder you.

We do know Anarchy Reings supports three player online co-op. It will be available for the Xbox 360 and PlayStation 3 on July 3rd.