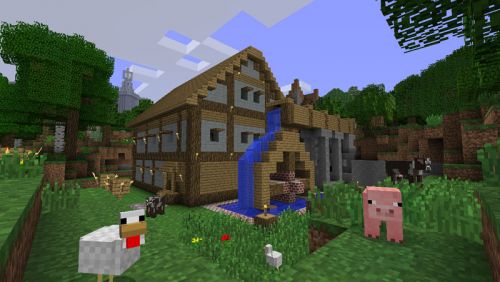 Chris says: I find it hard to believe that I’ve been with Co-Optimus for almost half a year now. Time sure does fly when you’re writing about things you like. I feel like I’ve grown more as a writer than I ever have before. But other than my participation in staff meetings and the various pizza lunches with boss man, Nick, I don’t really play with these guys as much as I’d like. That’s why I got excited when Paul and I were being paired up for a co-op session, especially since we were going to play a game I have been going gaga over lately: Minecraft: Xbox 360 Edition.

Just like everyone else I work with, Paul is one chill dude with lots of knowledge of the gaming industry and has a great sense of humor. I don’t know if this is just me, but I feel like I can get to know someone through playing with them pretty well. Whether it’s their mannerisms or choices made, I usually can tell whether that player is someone I’d want to play online with more often. Paul is one of those guys. (Aww, shucks! - Paul)

This being his first time playing a Minecraft, it was interesting to show off a game that I had already be greatly  accustomed to for a while now (even though I hadn’t played the game before on PC). Although I wanted to do the more challenging things the game rather than chop wood or develop a shelter, I sort of had to take Paul under my wing and give him a crash course of Minecraft’s depth.

The first minutes of the game are sometimes the most interesting, mainly because you only have a limited amount of time before nightfall hits and enemies spawn to kill you. With little to nothing for protection, you’re forced to move quickly to establish a base camp. Luckily for us, I had everything we needed ready to go. I had already been playing the game for a few weeks, but it was nice to show off my Minecraft home to Paul. I felt like I was on an episode of MTV’s Cribs.

Unlike some players who focus on crafting giant structures or cool mechanisms, I prefer building scenic, natural hideouts that can serve as hubs for mining diamonds and gold. After the tour, we decided to head down into my large mine and do a bit of prospecting. During our quest for finding rare veins of diamonds, we talked about life, our goals, and what else we were playing at the time. It might sound boring at first, but I believe doing so made playing Minecraft that much more entertaining. Not just because we were treasure hunters and looking for massive loot, but I got to know my fellow Co-Optimus co-worker better. Hopefully I made Paul an official Minecraft fan in the process.

I can say that I am becoming closer acquaintances with these people I work with, who aren’t just my co-workers, but friends. Over time, I hope I’ll get more chances to play with them on a more regular basis as I continue to write for Co-Optimus. First off, while the 360 version of Minecraft has a lot more tutorial information than the PC game, starting out with an established player was still invaluable. Before Chris and I joined up, I gave the tutorial a shot. At first Achievements were popping left and right, until I got to the furnace tutorial. Quite simply, I couldn’t figure out where to get fuel to burn stuff, despite pouring over the in-game text repeatedly. Chris told me how to do it straight away, and suddenly I could play Minecraft again! He even taught me how to fish, so now I can eat for a lifetime (in-game).

Pretty much everything Chris said applies to my own impressions of our session as well. Dude has a super nice virtual place, I can tell you. I also discovered that Minecraft is a terrific game for zoning out while you work on repetitive tasks together. We descended into Chris’ mineshaft and chipped away at the walls for like an hour while discussing this and that. Co-op in this game certainly isn’t the most nail-biting experience, but just relaxing and working with friends still qualifies as a good time in my book. It's nice to be able to wind down with a game rather than just raise the blood pressure!

Minecraft: Xbox 360 Edition sold like hotcakes covered in M & Ms, so I’m sure many of our readers have it in their collections. Have you guys had any choice Minecraft co-op experiences?