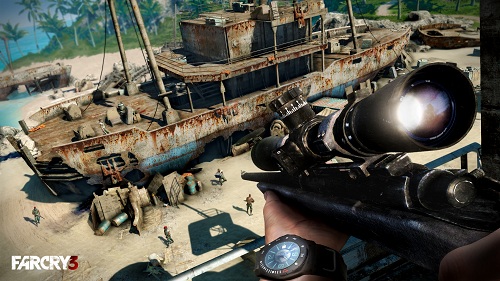 Ubisoft just announced at the Sony Press Conference that Far Cry 3 will have 4 player co-op. A group of four friends will be able to play through a dedicated co-operative campaign that will contain a totally separate experience than the single player. Grab your guns and sun tan lotion because we're going to take this island back.

The game play through had four players simultaneously killing the mercenaries that plague the island in Far Cry 3. Ubisoft demonstrated the co-op campaign with a totally new gameplay demo that has never been seen before and it looked very challenging. The players had to work together to complete objectives, revive each other, and of course kill everything that stood in their way.

This was an awesome surprise and we're hopping on the hype train because we're excited to do some more shooting with our co-op buddies. Ubisoft also announced that there will be exclusive DLC for people who pick up Far Cry 3 on the Playstation 3 when it hits store shelves September 4th later this year.