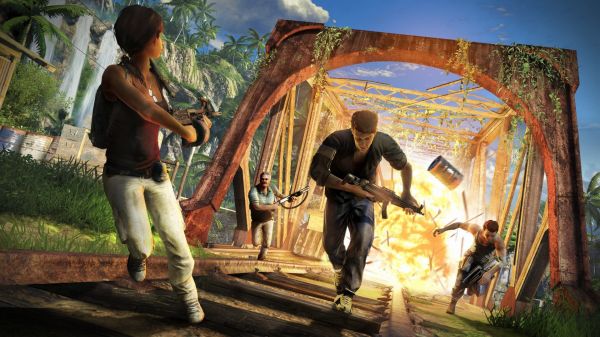 We were surprised as you were when Ubisoft announced a co-op mode for Far Cry 3 at last June's E3. I actually got some hands-on time with the co-op demo, and I was very impressed with the game. This isn't a tacked-on survival mode or simple add-on for a feature checklist. It's a pretty ambitious mode which features explosive, action packed gameplay.

The following video contains footage from the E3 demo. The four co-op characters must work together as they attempt to track down the game's main antagonist and seek their revenge. You'll see several class load outs, different objectives and also get  a glimpse of the competitive sniper event. You may recognize the narrator, Ditte Deenfeldt, as the developer I interviewed at Ubisoft's E3 booth. She frick'n loves co-op, and it shows. Check out the video and prepare for good old fashioned co-op carnage.

I'm looking forward to this one. Far Cry 3 supports two player local co-op, four player online co-op, and combo co-op. It will launch on December 4th for the Xbox 360, PlayStation 3, and PC.