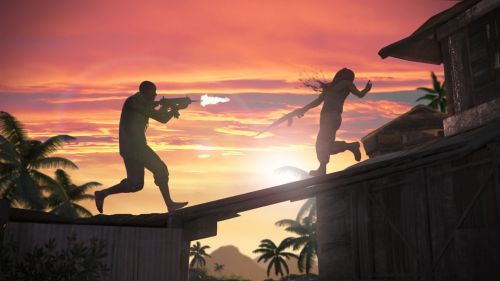 Before we all get overwhelmed by the 2013 trailer-tease that is the VGAs, I'd like to share this Far Cry 3 video with you. Ubisoft's 10 minute featurette is a great introduction to the open world game. I've dabbled in both the co-op and single player campaigns. Both are good, and very different from each other. This is also the only game that has managed to keep Borderlands 2 out of my Xbox 360 for more than two nights in a row.

Early in the single player campaign I made it to a mission that suggested I head west to see some important contact. I said nuts to that and went east. Sure, I've spent most of my time being set on fire and getting eaten by animals, but it's still been good bloody fun. You can see our impressions of the co-op mode from our hands-on time at E3. So far the game has been a blast, and the reviews have been pretty stellar as well. Check out the video and enjoy.

Warning: Clicking the "Hey" link to the video will take you to a NSFW language portion of the video. Other than that, expect the usual stabbings, shootings, and explosions that come with an M-Rated title.