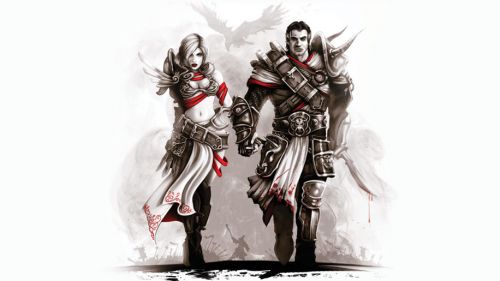 Right before the madness that was E3 fell upon us, Larian Studios, a developer best known for the Divinity series of RPG games, made an announcement about the next entry in the series: Divinity: Original Sin. Set once more in the mythical world of Rivellon, Original Sin is Larian Studios' attempt to "get back to their roots" after the hack-n-slash, actiony Divinity II: Ego Draconis. The return to their roots also includes a return to cooperative gameplay, a very wise decision in our view point. Game Informer was able to get a preview of the game before it was demoed at E3 and based on the brief 4-minute they shot, I'm getting excited to see where this title will go. Elements of Diablo, Magicka, and Star Wars The Old Republic's dialogue system all show up, along with a turn-based battle system that reminds me of the more classic RPGs like Final Fantasy VI. If that doesn't pique your RPG-loving curiosity, then maybe you should get that looked at...

The preview shown in the video shows two players, one controlling a female character and the other a male, going through a few highlights that the game has to offer, like the combat and the dialogue system. Starting with the combat portion, the two characters have magic they can wield and combine, akin to how spells/elements can be combined in Magicka. Create a patch of ice, melt it with fire, and then send electricity through it to shock some foes. That feature alone got me to sit up and take notice as I really like Magicka's approach to spellweaving, mishaps and all. The other feature they show is the cooperative dialogue system. Essentially, when presented with the option of diverging dialogue choices, each player can choose their own response to the situation. If the choices differ, a behind-the-scenes dice roll (modified by each character's attributes) will determine which dialogue choice will come out on top.

While only two players were shown playing the game, the developer has confirmed on their own website that the game will support up to 4 players, though it hasn't been fully spelled out just yet what different modes (i.e., local, online, combo) will be supported. Some sites are reporting that it will be support by Steamworks, which means online play seems likely. There's also no release date set for the game, so, for now, we'll have to make due with the preview video and these screenshots/concept art.