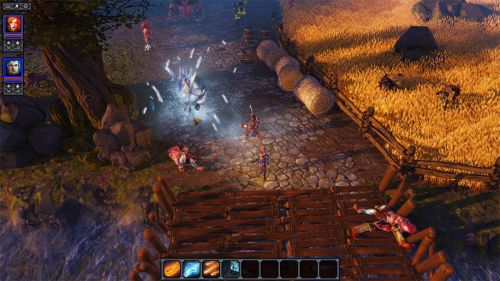 Belgium based Larian Studios recently announced the latest entry in the Divinity series, Divinity: Original Sin, which is a "return to roots" for them as this Divinity will offer a gameplay experience similar to a tabletop RPG and, for you RPG old-timers, Ultima VII. What's more, the game will also allow you and a friend to play through the entire campaign cooperatively as you control the main protagonists, the condemned warrior and the mystical sorceress. However, up to four players can join in on the fun, so how does that work?

We sat down with Swen Vinke, founder of Larian Studios, last week to talk a little more about these features and what we can expect from the co-op portion of the game. He was readily forthcoming about what co-op modes will be implemented, how character progression will work, and what was the inspiration behind all of this. He's also a man that seems to share our passion for cooperative gaming, and maintains a blog that provides some "behind the scenes" type views into games development. Check out our full interview with Swen after the break.

For those of you on the go, or unable to access the video, here are the quick highlights:

- Co-op play will be supported via online and LAN connections. though it doesn't seem it will support a combination of the two

- Friends will be invited into your game to control the other character, and character progression will be kept in the host's game (i.e., you can't join a friend's game, get loot/level up your character, and take that character back to your own play session)

- The real focus is on Divinity: Original Sin being a two-player experience, but up to two other friends can join the game as "recruits" ; these characters are fully customizeable and can collect loot, however, they will not have input into the story

- The inspiration of co-op conversation came from a couple of different sources; one of which being capturing that tabletop RPG feel where everyone has a say in what's going on, but the other being that Swen wanted to play this type of a game with his girlfriend

- The two main characters will be able to flirt with one another (they are holding hands in the concept art, afterall), which can raise some further interesting situations/scenarios when playing with your significant other

Divinity: Original Sin has a slated release date of Q2 2013, and we're certainly looking forward to hearing more about it as the game develops!

We'd like to thank Swen again for taking the time to speak with us and answer our questions about Divinity: Original Sin's cooperative experience.