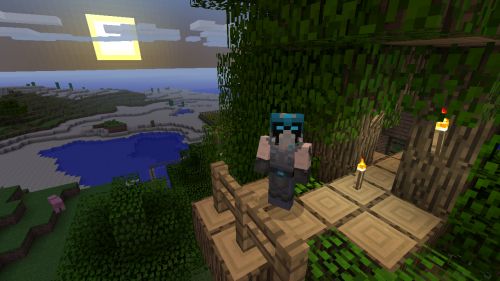 Wear some new flair for both your in game Minecraft: Xbox 360 Edition avatar, as well as on your Xbox dashboard to show off your inner Minecraft fanboy (releasing soon!).

Covered a few days ago, Minecraft: Xbox 360 Edition will be receiving 40 new skins for players to purchase for their own Steve. Currently, only four are totally free, while the other 40 will be revealed when you download the free skins regardless. Still, that doesn’t mean we can’t pass the word on for those curious enough to purchase the "Skin Pack1 DLC". Take a quick peek at four more skins revealed to players (shown left to right): In addition, if you’d want to change up your Minecraft “Wood” Xbox Dashboard theme (earned in game) to a more nighttime setting, Microsoft has now made the “Stone” theme available on the Xbox Live Marketplace for only 240 points. This theme is bit more interesting than “Wood”, with some enemy skeleton riding on top of spiders in the moonlight background. Again, no official word on the release of the 1.7.3 Title Update/Skins Pack 1 DLC has been unveiled. However, a tweet by 4J Studios stated that it’s now submitted to Microsoft for review:

The 1.7.3 update will be going into Microsoft Cert Test today. Can take up to 10 days for the test. Playxbla might have more news later ;)