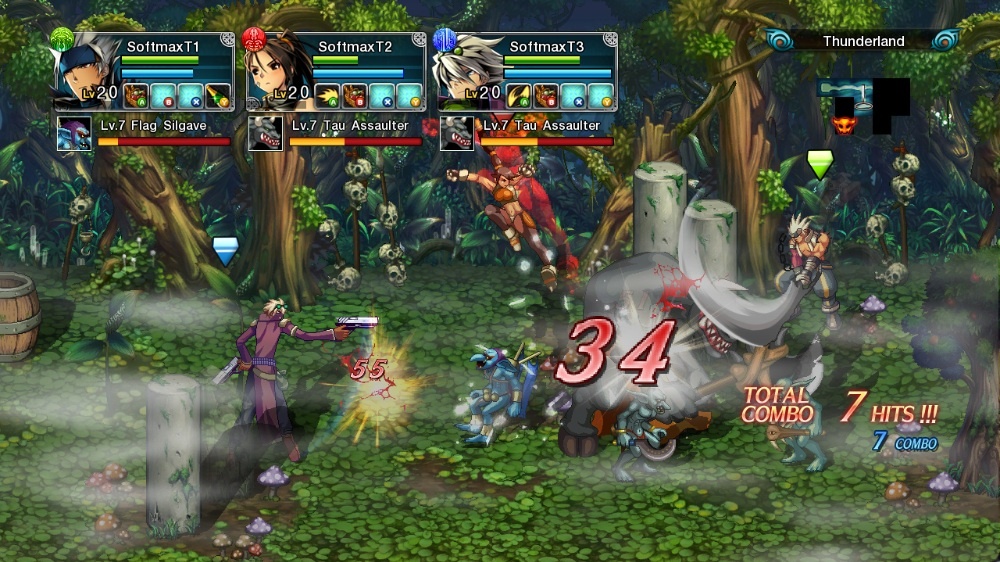 This Week in Co-Op, Marc and Paul take you on an epic journey into the dangerous punching dungeons of Dungeon Fighter LIVE.

As our our turn for This Week in Co-Op rolled around, Paul and I settled on a clear choice very easily: the recently released Dungeon Fighter LIVE. Both of us have an abiding love for brawlers, so it was only natural that we gravitated to the new, shiny Xbox Live version of the popular fantasy fighter.

To prepare for our team-up, so I wouldn't be too much of a n00b, I plopped down on the couch with my youngest son and we checked out the local co-op. I was immediately struck by two things. First of all, the character designs were very slick, and the game looked very much like a great anime show. The heroes and enemies all looked great in glorious HD on my TV. On the other hand, the interface and navigation systems in Dungeon Fighter LIVE weren't nearly as polished. Loading screens popped up a bit too often, and finding a new quest, equipping a new item, and many other such tasks, was clunky.

Still, the game was fun, though a little less button-mashy than I was expecting. My son and I cleared the first dungeon, levelled up, then... cleared the same dungeon again. I suppose I was just used to the idea of the levels being given to you automatically, as in the brawlers of the past, but that's just not the way it works. We cleared the dungeon again, and turned it off for the day.

I nervously awaited my appointment with Paul, fearful that I'd embarass myself...

Marc's fear was justified, as during the first few minutes after partying up he spoke nothing but Portuguese. It took a little while, but eventually we both switched to our native English, after which gameplay ensued. My actual worry had been that I'd outlevel Marc since I played the game a ton for my co-op review. He didn't have nearly as much time with the game due to being out of town (Portugal?) over the weekend.

As it turned out, he was level 2 and I level 14, making for a slight imbalance. Still, this gave me the chance to look after Marc with my beefy Slayer, protecting him from the game's goblin riffraff. Rather than skip ahead to the harder dungeons I'd unlocked, we decided to run through the early ones. That way he could unlock more levels and areas of town, getting him closer to the meatier parts of the game. Besides, I know the beginning super well, having escorted my girlfriend, son, and daughter through it on more than three separate occasions.

Marc is a natural brawler, so he quickly adapted to the threats we faced. One such challenge comes from enemy Champions, who can be spotted by the colored circle around their feet. These guys knock you back and deliver massive damage whenever they get up from a fall, so it's vital that players stay away after knocking them down. While my son took a while to get the hang of that, Marc caught on right away.

Since the game annoyingly doesn't allow parties to stay together between dungeons, we spent a fair amount of time split up as we attended to our needs in town. The Xbox Live party system kept us in touch, so it wasn't as disjointed an experience as it could've been. I explained a few things like the quest system and the importance of repairing gear during each trip to town.

I'm glad I finally got to partner up with Marc. I plan to spend lots more time with Dungeon Fighter LIVE, and I hope he does as well. "Um abraço," buddy.