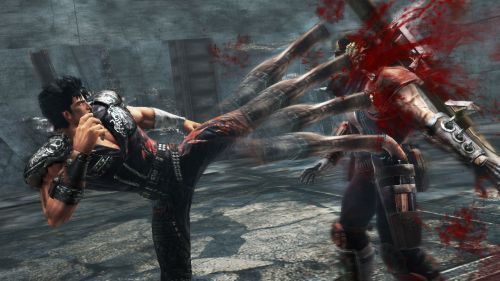 It was announced back at E3, and I've included the reveal trailer below. Not much is known about the game, but if it's anything like the first title, fans will be properly served. It's a Dynasty Warriors-ish version of the popular magna and anime, complete with all the gory finishing moves and primal screaming. Check out the video and screens for a little tease.

Details are still sketchy on the game's multiplayer modes. Ken's Rage originally supported a two player local co-op "Dream" mode. According to Tecmo Koei European boards, the Dream mode will be returning, along with more online features. Does that mean online co-op? We can't say for sure, but that would be nice. Other improvements include additional story arcs, more move sets, and "magna-like" cut scenes.

Fist of the North Star: Ken's Rage 2 is expected to launch this December in Japan (as Shin Hokuto Musou). No release date for the U.S. has been announced, but since it was revealed at E3 you can be pretty sure it's coming stateside. We'll keep you posted on all the co-op details as they become available. Now I need to find my Mad Max shoulder pads and start practicing my Bruce Lee battle cries. I'm just kidding. I write every article while wearing my apocalypse gear, and I'm always screaming at the screen. Hell, most times I type like this. Hmm... Fist of the North Star: Ken's Rage is going for ten bucks on Amazon. I might have to pick it up. I do love me some 'sploding heads.