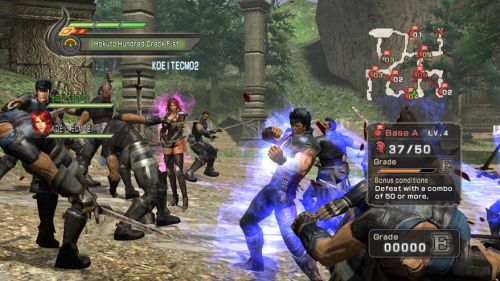 The first Fist of the North Star: Ken's Rage was an alright-ish brawler that was good enough for many fans of the franchise. It featured super powered martial artists from the popular manga series, following their bloody adventures as they literally punched and kicked their enemies (and each other) into bloody chunks. Out of all the licensed games I have ever played, it's definitely one of them. The game supported a two player split screen mode that left our reviewer, the esteemed Marc Allie, wanting more. The sequel, Fist of the North Star: Ken's Rage 2, has upped the co-op ante with online support, but is has lost local play in the process.

Fist of the North Star: Ken's Rage 2 will support two player online co-op in the returning Dream Mode. This mode consists of new missions that take place between the main missions of the single player Legend Mode. Quests are grouped together by fighting styles and follow their own story lines. Certain characters are available only for particular story arcs. Finishing a quest will unlock new adventures, and you'll be able to level up your characters and make them even more powerful as you head-splode your way through the game.

FYI, Koei, some of us live with fellow gamers who actually enjoy split screen. It happens. Is this a fight, or a Jem concert?

According to the Fist of the North Star: Ken's Rage 2 website, there's also a four to eight player online Team Match mode where teams of two, three, or four can do battle against each other. This is an interesting take on competitive play, as it seems that everybody will be smashing AI-controlled enemies rather than fighting each other. The team with the most points wins.

All of the members from both teams will compete in a single mission and look to achieve the required conditions. Work together with your teammates to complete the mission.

Playing online may reward you with items more powerful than the ones you would receive offline. Although this is technically a competitive mode, it appears that you'll be brawling side by side with your adversaries. You'll then be scored on style points. From the description, it appears to be more like a cooperative mode with some healthy competition. We won't know for sure until we get our hands on a copy and put it through its co-op paces.

Fist of the North Star: Ken's Rage 2 will be released on the Xbox 360 and PlayStation 3 on February 5th. It will come to the Wii U at a later date.