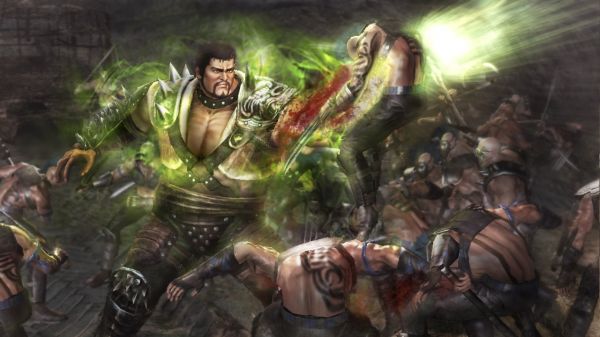 There are many, many characters in the Fist of the North Star universe. Several of the kill-crazed martial artists will be making an appearance in Fist of the North Star: Ken's Rage 2. Many will be playable. If you like your rage-karate infused with supernatural, life-ending special effects, this may be the brawler for you.

Today we have three new character videos as well one long video featuring a bunch of awesome promotional items that will never, ever, be available in the US. (At least not at a reasonable price). Check out Jagi, Toki, and Raoh himself as they punch dudes to pieces.

Jagi dual wields shotguns. No one told him it was a brawler.

Raoh came here to do two things: Murder-punch fools and, well...that's it. Just the murder-punch thing.

I can't follow what's happening in this trailer, and I don't care. I just hope instead of "Light," "Medium," and "Strong" attacks the buttons are labeled "Kill," "Kill Harder," and "Kill Hardest." I'm hoping that if I mash them all at once a fountain of blood will explode from the screen. Seriously.

I was just about to post this bad boy, and a handy-dandy press release popped up in my inbox. The following features will be available in Fist of the North Star: Ken's Rage 2:

1.       Legend mode, follows the storyline of the entire manga, starting with a re-imagined version of ‘Raoh’ and covering ‘Celestial Emperor’ and ‘Land of Shura’. This faithful adaptation ensures that this mode can be enjoyed by both fans of the manga and new comers to Kenshiro’s post-apocalyptic world. Different characters will be controlled for each episode while ‘boss’ encounters will feature entire famous scenes from the manga, recreated in intricate detail.
2.       Over 20 playable characters will be available, including Falco, Shachi, Shew and Juza.
3.       Dynamic new moves.  The destructive power of the techniques of Hokuto Shinken and Nanto Seiken meet the intense action of the Warriors series to produce a thrilling experience. In addition to the signature moves of the first title, new actions such as ‘sprint’ and ‘dodge’ have been added to the move sets.
4.       Dream Mode introduces new, original storylines to the Fist of the North Star Universe while bridging the gaps between parts of the main story, often focusing on some of the series’ minor characters.
5.       Online Co-Op and Versus play. For the first time, Dream Mode will be playable in co-op or versus play via the internet.

I noticed the press release didn't mention anything about local split screen co-op, which was available in the first game. We contacted Tecmo Koei and requested more information about local co-op. We'll update our database accordingly when we hear back.

Fist of the North Star: Ken's Rage 2 supports two player online co-op and may support  two player local co-op. It will be available on the Xbox 360 and PlayStation 3 on February 5, 2013. It is also being developed for the Wii U. That version will be released at a later date.