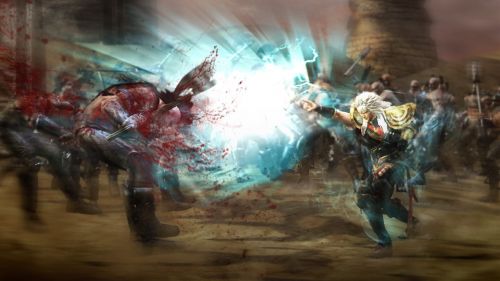 These new Fist of the North Star: Ken's Rage 2 screens feature four new playable characters. Yuda, Fudu, Shachi, and Shuu will each be making an appearance in the sequel to the Fist of the North Star: Ken's Rage. The super-violent, ultra-cheesy, so-bad-it's-almost-good beat'em up did well enough to earn a second installment. As flawed as the first game was fans still flocked to it. You can't keep a good fanatic down.

I'm familiar with the 1986 animated film, but my "expertise" stops there. The franchise basically takes a beloved, bloody magna/anime and shoehorns the story and characters into a Dynasty Warriors mold. I picked up the first game and enjoyed it for what it was. I like exploding heads and slicing laser fingers as much as the next guy.

These screens show some of the new characters in action. You can check out the game's Japanese home page for even more gory screenshots.

Like its predecessor, we expect Fist of the North Star: Ken's Rage 2 to support two player co-op. The cooperative "Dreams" mode will be returning. We're still waiting to find out the specific co-op details. (The smart money in on two player local co-op) As soon as we do, you can be sure we'll share them with you. FotNS: KR 2 is expected to release for the Xbox 360 and PS3 this December in Japan. We expect it to come stateside in 2013.