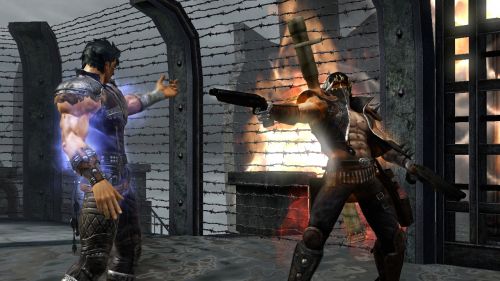 Koei keeps on pumping out videos and screenshots for Fist of the North Star: Ken's Rage 2. The latest trio of trailers feature everyone's favorite post apocalyptic warrior, Kenshiro, as well as Rin and Bat. That's right. You can play as Rin and Bat!

The brawler will include more characters than Fist of the North Star: Ken's Rage. You can see videos of Jagi, Toki, and Raoh here, and Rei, Souther, Shu, Juda, and Shin here. The combat should also be much smoother this time around. I played a bit of the first one and the characters felt like they were fighting underwater. The good/bad news is Koei likes to milk their franchises for all their worth, so if this version isn't good a new one should be along in a year or so.

You always wanted to play as Bat, admit it.

Rin? Really? Fine. You can play as Rin. I hope you're happy.

Fist of the North Star: Ken's Rage 2 supports two player local co-op and two player online co-op. It will be available on the Xbox 360 and PlayStation 3 on February 5. It will come to the Wii U at a later date.