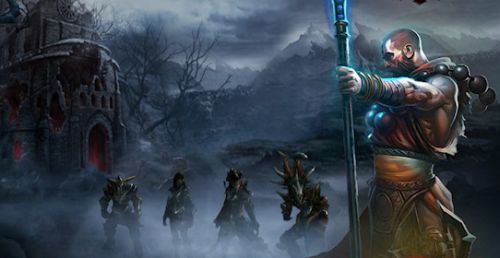 It may seem odd that we're covering a story that puts co-op in a negative light, but I think that's only true at first glance.  To truly understand what's going on with Diablo 3 and just how over 10 million people are playing the game requires a look at the history of the franchise.  It's easy to have a knee jerk reaction to a quote, but sometimes it's better to sit back and examine the full picture.  First, lets start at the quote in question.

This is somewhat of a shocking revelation for fans of the franchise, as the fondest memories of their Diablo games come from those co-op moments.  Perhaps shocked even more is Blizzard, who's familiarity lies with World of Warcraft and Diablo 2 in terms of social and multiplayer gaming.  So what exactly is happening with Diablo 3 that makes it a single player focused gaming experience for many while Blizzard clearly designed it, by their own admission, for cooperative multiplayer through and through?  It's a question that isn't answered very easily, but examining social media around the launch of the game it was easy to see folks were frustrated with Diablo 3.

Ten years is a long time to wait for a sequel, so obviously expectations were high.  Is there some sort of artificial barrier that are hindering folks from enjoying co-op?  The always on internet requirement was a huge talking point before the game was released, were these core gamers - the ones most likely playing co-op - turned away?

We should also examine Diablo 2 when discussing this.  The game was played and patched for a solid 10 years after release.  Folks weren't playing it solo, they were logging onto Battle.net and playing co-op.  It's the reason the game had legs, and it was the reason folks clamored for a sequel.  It was the comradery and team based elements that kept it interesting for players as approached a nursing home age in video game years.  It was the character builds and showing off your loot that gave the incentive to come back for more.  So why hasn't Diablo 3 simply picked up where 2 left off? I think when you look at the sheer numbers of Diablo 3 players, you're going to find people tend towards single player right now because they are still feeling the product out.  While some of the time might be spent in co-op,  a lot of folks simply want to play through the game once at their own pace to experience the story.  After that it's the replay factor, the going back with friends that keeps the longevity.

There's also several balance issues with co-op play, some of which we've seen fixed already.  But even the upcoming 1.04 patch aims to make co-op more enjoyable and worthwhile.  Systems like the way gold and special weapons are divided up and found are getting tweaked, monster health is getting tweaked, and even basic weapon damage is getting changed up a bit for co-op play.  Blizzard WANTS you to play co-op, not only because it's a lot more fun (it is) - but because it validates their design decisions.  You can read about the full patch details over on the Battle.net blog.

It's only been 3 months since Diablo 3 was released, so it's difficult to tell if the trend will continue as gamers move from single player gameplay to co-op.  As the single player gamers tire of the game and move on, the co-op players will hang around and shift that percentage back their way.  We're not discouraged by the statement made in our headline, and we're encouraged to see Blizzard doing everything they can to make a better game for co-op players.  Let's just hope it's not too late before we see some other titles this Fall.