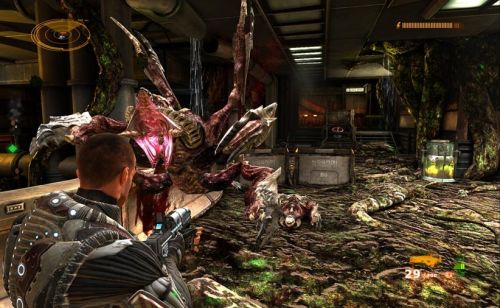 The word scourge is not used frequently enough in common vernacular, losing most of its kudos after American Prohibition and the Scourge of Alcohol.  Well pour yourselves a pint, because not only is booze legal, but a new game is coming called Scourge: Outbreak.  This 4 player online co-op game is coming to Mac, XBLA and PSN later in the year and confronts the player with stumbling enemies.  These enemies are not drunk, but a bit dead.  Find out more and check out some screens after the jump.

Set in the near future, up to 4 players can tackle the 6 hour plus campaign - details of whether this is online only are not yet known.  Each player will control a character with unique abilities, so it will be up to team to work together to harness each person's strengths and protect their weaknesses.  With the addition of XP and an eight player versus mode, there should be a lot of gameplay time available from this download only game.

Tragnarion Studios have handily provided a series of key points that the game offers. Nice!

Scourge: Outbreak is a 3rd-Person Shooter created using Unreal Engine 3 for the Xbox 360, PS3 and Mac platforms, and delivers the following exciting features:

Update: We originally reported Scourge: Outbreak as coming to PC, but for now, no PC version has been announced.