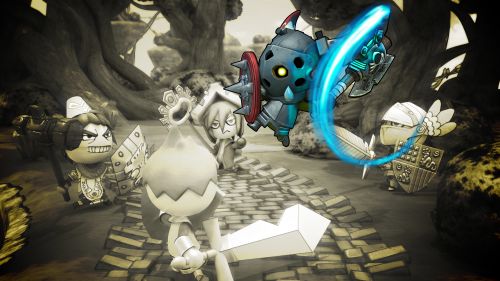 On PC and mobile phones, freemium or free-to-play games are all the rage. Freemium games cost nothing up front, instead making their money from optional microtranactions. For whatever reason, console manufacturers Microsoft and Sony have only really started opening up to the free-to-play business model this year, with multiple titles in the works for both systems. Now Microsoft has announced that massive online action game Happy Wars will be the very first Xbox 360 freemium game when it launches in fall 2012.

Happy Wars is basically the 360's answer to Fat Princess. Teams of up to 15 players can compete against each other or team up in co-op against AI enemies. Combat involves hacking, slashing, and shooting at each other in a comical fantasy setting.

We already knew Happy Wars featured extensive character customization options, and it turns out that's how the game will be monetized. Some of the game's vast assortment of items can be earned during gameplay, while others will cost Microsoft Points to purchase. All that's required to download the game itself is an Xbox Live Gold subscription.

Happy Wars looks like an adorable and yet cutthroat action game. The fact that all Xbox 360 Gold members can play it for free should make for a huge and active online community. We'll try to score some hands-on time at PAX, so stay tuned!