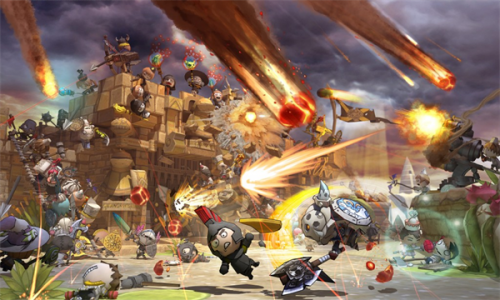 Just last week, Happy Wars, one of the only two games to be a part of the first free-to-play program to be experimented with by Microsoft, has opened up its beta for those looking to take on gobs of players in one, giant, co-op brawl. What’s more awesome to hear is that anyone who is an Xbox LIVE Gold member can go on a download the title (along with Ascend: New Gods) absolutely free and play with others online. Micro-transactions will be available, however, in both games, but you won’t have to purchase anything to enjoy this co-op game.

ToyLogic, the creative minds behind Happy Wars, wants to make the game able to be in the hands of as many gamers as possible. This beta should bode well for lots of players who want to play the game, but might not have the funds for it when it officially releases. Think of this as a glorified demo that you can play with your friends! Happy Wars plays much like it would an Awesomenauts or League of Legends, just on a much grander scale of players. The objective is to push the enemy forces back into their territory until you take down their main base. So what do you have to do to be a part of the Happy Wars beta? First, you must be a part of the Happy Wars preview program found on the Xbox LIVE dashboard to play the game. Those that have this new beta channel should notice it as a part of the Xbox LIVE Update Public Beta. Select that icon on Xbox LIVE and it will open the beta for you, along with other sweet title demos to choose from. If you couldn’t see the dashboard preview application on your Xbox a few days ago, the first round of Public Beta applicants had to be taken care of initially before the next grouping, so new applicants should now be able to join without any trouble.

Try out the Happy Wars beta for yourself and leave us a comment below telling us what you thought of its co-op gameplay! We’d love to hear your feedback on the massive co-op this game supposedly holds!