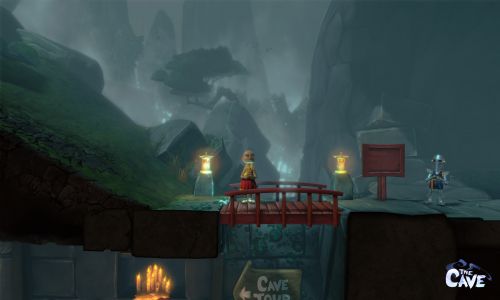 When we first heard about Double Fine's latest game, The Cave, certain members of the staff (mainly, Mike and myself) were ecstatic. Then, Mike got his hands on the game at PAX and was able to fill in some of the details with how the game plays. Since that time, though, we haven't heard too much about The Cave or, indeed, from the The Cave itself. As its release date on XBLA, PC, PSN, and Wii U eShop looms ever closer, a little more background to this whole adventure is revealed as The Cave itself introduces us to some of the cast of characters... And what motivates them to explore its dark depths...

While we've learned who the seven playable characters are previously, this latest trailer gives us a better picture of the kinds of people we'll be dealing with here. Albeit, each has their own little Double Fine/Ron Gilbert twist.

The Cave still has a release date of January 2013 and hopefully we'll be getting a firmer release date (and maybe some more info about co-op) when the next character trailer hits.