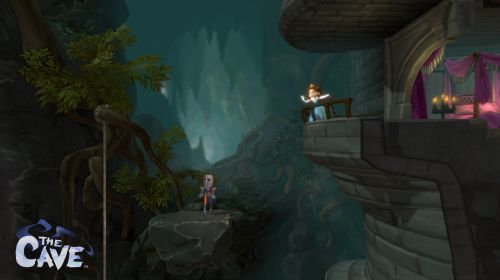 Ron Gilbert's latest adventure, The Cave, is available for download now on the PlayStation Network and Nintendo Wii U. It will be available on the Xbox 360 and PC tomorrow. It's a Double Fine game, so you know it should be good, unless you're one of those soulless monsters who doesn't like Double Fine games. What's wrong with you? Embrace the love, and embrace The Cave.

If you have somehow missed out on our E3 2012 preview and PAX 2012 hands-on impressions, that's okay. The blue text in the previous sentence will take you to them. If you're approaching your click quota for the day, no worries, I'll sum it up: The Cave is an adventure/puzzle/platformer which features a cast of seven characters and a mysterious talking cave. Choose a team of three adventurers and go it alone, taking control of each character on the fly, or play with a few friends via local co-op. There's a handy launch trailer after the break. I know, it's another click. Take a break if you're feeling light headed from the effort. We'll still be here.

There now. Wasn't that worth it? Different characters you chose will take you along different paths in each playthrough. It should be an interesting ride.

The Cave supports three player local co-op. It is available today on the PSN and Wii U. It will be available on the XBLA and PC tomorrow. The Cave is priced at $14.99, or 1200 MSP.