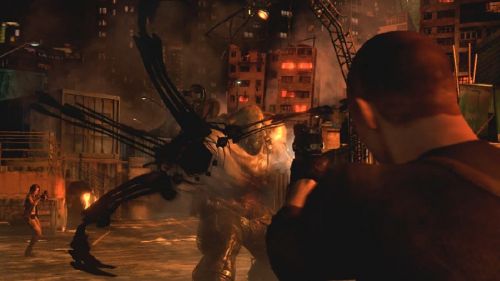 In two short weeks Resident Evil 6 will once again be infecting the gaming community. Players who picked up Dragon's Dogma were introduced to the latest installment in the survival horror third person shooter franchise in an exclusive demo. Now everyone can get in on the action. Today the Resident Evil 6 public demo is available to anyone with an internet connection and an Xbox 360 or Playstation 3.

According to the XBL Marketplace's description, "This demo differs from the version that was made available through the purchase of Dragon's Dogma." I missed out on that exclusive, but I managed to pull myself away from Borderlands 2 and jump into the new demo this morning. I stomped on a few zombie heads  while roaming around in Leon's campaign. It's fun in that wholesome, Resident Evil, zombie-killing, sort of way. Portions of all three campaigns are available and the demo supports two player online co-op. You can read our hands-on impressions from E3 here, or you can play the demo yourself and leave your own impressions in the comments section.

Resident Evil 6 will be out on the Xbox 360 and Playstation 3 on October 6th, with a PC release coming at a later date. The full game will support two player local co-op and up to six players in online co-op.