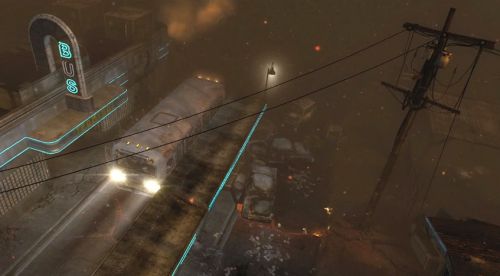 The new trailer for Call of Duty: Black Ops 2's cooperative "Zombies" mode offers very little information. There's a bus, creepy music, fire, and some zombies. It looks like the survivors will be armoring a bus, maybe in a similar fashion to 2004's Dawn of the Dead remake, (and countless other zombie flicks). Take a look and let us know what you think.

It appears we'll find out more information next Wednesday, September 26th. Ah, the old teaser for the trailer trick. Well, it worked on me. If I can pull myself away from Borderlands 2 and Torchlight 2 maybe I'll tune in next week. Who am I kidding? I love shiny new stuff!

We know Call of Duty: Black Ops 2 will support at least four player online co-op. More players may be included in the zombie mode or in the AI killfest that is "Combat Training." The last Black Ops supported two player local co-op and combo co-op as well. Hopefully the sequel will follow suit.

Call of Duty: Black Ops 2 will launch on November 18th. It will be available on the Xbox 360, PlayStation 3, PC, and Nintendo Wii U.