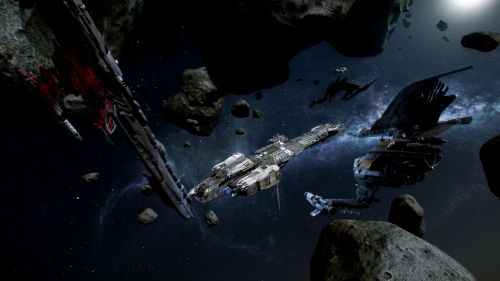 We've only briefly talked about Star Citizen, which is Chris Roberts (Wing Commander, Privateer) return to PC gaming after a 10 year hiatus.  The game started up crowd funding a little over a month ago on both its own site and more recently on Kickstarter.  Funding actually wraps up tomorrow and while the initial goal was around 2 Million - the game is has crested the 5 million dollar mark with over 73,000 backers.

Because of this space action game has gotten a lot more ambitious, with several stretch goals being met including some great ones for co-op gamers surrounding the "Squadron 42" campaign.  Not only has the mission count been doubled, the game will feature celebrity voice acting and a "richer and deeper" experience.  Squadron 42 itself will be expanded from 25 to 50 missions.  This story based campaign will be playable in co-op with friends.

There's still a few hours left if you'd like to fund the game.  Just head to the official site and fund away.

Star Citizen is a space combat and trading game aimed at the PC.  It'll launch sometime in 2014 with several backer levels getting access to the Alpha and Beta in 2013.