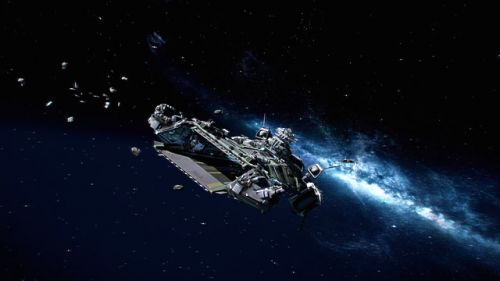 No, that image is not the TCS Tiger Claw you see above, though the ship's creator is very familiar with the famous ship from Wing Commander.  That is a screenshot from Star Citizen, an incredibly ambitious new project from Chris Roberts.  Roberts is famous for his days at Origin systems creating the Wing Commander series and then moving on to launch Freelancer and Starlancer.  All of these games are from a genre that is all but extinct lately, the space simulator.

Roberts left the game industry after selling off Digital Anvil to Microsoft in 2001 and went on to a career producing and even directing movies.  He was simply burnt out on the game industry and frustrated that technology wouldn't allow him to create his next vision.  Now though, Roberts says that computing power and technology is at a place where he can create the game he's always wanted, but to do so he's going to need A LOT of money.  We're talking almost 4 million dollars to create this epic game.

Before you balk at the figure, watch this video.

So what exactly is Star Citizen?  If you watched the video you know it's a bit of an open universe game where players can do whatever they want.  They can join the ongoing war, they can become a pirate, they can become a miner.  Whatever you choose your goal is always to make money and prosper in the universe.  And while it has a bit of an MMO feel to it, there are some distinct cooperative components.  The Squadron 42 Campaign, which gets players started in the war, will feature cooperative play and allow your friends to join you as your wingmen and woman.  Roberts promises this will have the familiar campaign feel of the previous space sim games under his belt.

We recommend checking out the interviews with Roberts about the game here at Rock, Paper, Shotgun and here at Polygon.

Of course asking for 2 to 4 million dollars to create a game is sort of unheard of, especially when Roberts says he still needs additional investors to make this happen.  In a way, he's trying to prove a point.  PC gaming isn't dead, and neither are the hardcore gamers that play it.   And what happens if he gets the consumer investment and not the corporate?  There's definitely a lot of questions.

The good news is, if you do contribute you can option to have your money refunded if the project doesn't happen - something that isn't' available through Kickstarter.  If you want to contribute, head over to the game's official site.

So what say you citizen, are you buying into Chris Roberts dream?