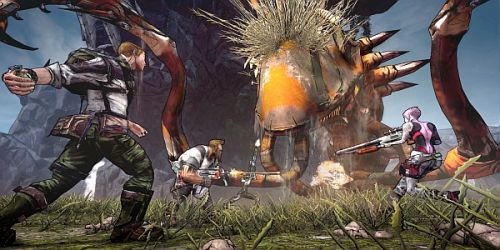 Initially, Borderlands 2 may have had a chance on the Wii U, but Gearbox decided against it in the end. Why? In short, the Wii U’s hardware was the deciding factor.

Taking a quick look at the launch window, it’s hard to understand why Borderlands 2 was left out of the all-star list of ports, such as Call of Duty: Black Ops II, Assassin’s Creed III, and Mass Effect III. Was Borderlands 2 too good for the Wii U? Certainly Aliens: Colonial Marines wasn't even though it's also a FPS title. Well, in a way, Aliens had something going for it that the other didn't. CEO of Gearbox, Randy Pitchford, explained the simple reasons behind why they went ahead with Aliens: Colonial Marines over their golden child, Borderlands 2 for the Wii U.

'The reason why there's not is because we couldn't think of a natural, obvious, 'OMG, I want that for what the Wii U brings to the table' feature.' he stated recently.

As it turns out, the newly featured GamePad controller of the Wii U (the main highlight of the console) was what it came down to. Pitchford and the Gearbox team decided to pass on the chance to use the controller because of certain gameplay aspects they wanted to retain within the Borderlands series. Fair enough, but why use Aliens instead to break into the Wii U platform? From Pitchford’s explanation, it looks as though Gearbox wanted Aliens to take on a whole different feel than from Borderlands 2’s, using the Wii U GamePad to expand the underlying, survival-horror gameplay elements.

But with Aliens, the first thing we thought was 'holy shit, I can have a motion controller in my hands!' When it's there in my lap it feels like I'm part of the movie. Just pretend for a moment that the GamePad is your personal scanning device for detecting Xenomorphs in the near vicinity. Could it save room on your TV screen by placing HUD items on the GamePad instead, making you constantly check your ammo supply or even current health status? The possibilities are endless. They wanted the controller itself to make you feel closer to movies and to the game more than any regular Xbox or PlayStation controller could do on its own. The question now is: will it do its job to enhance Aliens’ experience when the game releases? Pitchford sure believes it will!

No release date for Aliens: Colonial Marines has been announced by Gearbox as of late, but stay tuned! Comment on some interesting ideas they could do using the Wii U GamePad for the game below.