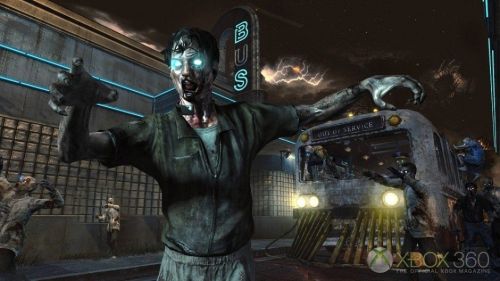 Even with these few screenshots, Treyarch has still said little about what the Zombies gameplay will actuallly offer, in terms of “new and innovative twists”, to the already fantastic co-op mode from Black Ops. However, we do have a good feeling about our chances of getting 8-player co-op capabilies for Black Ops 2 Zombies. Treyarch has since stated:

Typically Zombies would run on what we call the single player, the code base that's more single player centric. We've now moved that over to multiplayer. You guys haven't seen what that means. But for us, it's a lot more zombies, it's a lot more players," the Treyarch rep explained. “For us it's going to be a different type of zombie experience than people have experienced in the past. The roots of the traditional survival element will be there, but there's going to be a lot of new things that we're throwing in and we're really curious how fans are going to respond to that. A face only a mother could love...

Until we hear more from them about the actual features of Call of Duty: Black Ops 2 Zombies will house, such as exclusive Wii U distinctions, we’ll just have to sit tight and wait. From what we can tell, so far, things are sounding to be pretty good for co-op gamers.

It's become a much bigger part of the game, that we never anticipated was going to be as big it is.

ALSO: For all of you Mac users out there, Call of Duty: Black Ops will be arriving on your platform starting September 27th through Steam and other online retail (it will not include SteamPlay, however). Though it being fashionably late to the Black Ops party (if you consider a couple of years means “fashionable”), the game will be going for $50, including with it the “First Strike” Content Pack. “Rezurrection” will be available at the same time as the game hits stores, going for $15, and “Annihilation”/ “Escalation” will be added as a combined bundle in the future.