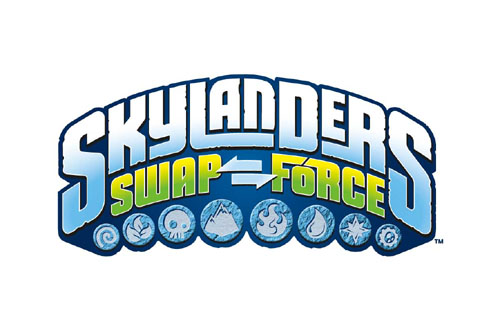 Yesterday evening I headed down to the NASDAQ building in Times Square for an exclusive first look at the newly announced Skylanders SWAP Force. I am sad to report that if Skylanders has its hooks in you (or your kids or your wallet), SWAP Force will likely just drive them deeper in. The new skylanders and brand new mechanic introduced with SWAP Force look just as addicting, if not more so.

Since this was a reveal event, it took the form of a presentation. Much of the presentation involved talking about financial earnings, discussing the Skylanders franchise success, and speculating on SWAP Force's future success. You, readers, will probably be most interested in the hands-off demo we were treated to as well as the facts about the game. The backstory for SWAP Force involves the Cloudbreak Islands, a magical land with a volcano that erupts once a century which replenishes the magic of the Skylands. During one of these eruptions, a brave group of skylanders were caught up in the explosion and sent to earth. This event imbued them with a special power: the ability to swap halves. Thus, the SWAP Force was born.

The demo started with a cutscene of goofball Flynn and a cat ally bantering whilst they flew through the air on a mission. We were told that SWAP Force will be a much more cinematic experience with a deeper story. Upon the end of the cutscene, the screen lit up with the familiar prompt to place a skylander on the Portal of Power. The first skylander we were shown was not a new one, but the classic Eruptor. This was to demonstrate that all previous skylanders will be supported in SWAP Force, which includes their character levels, upgrades, etc. The first thing that's pretty apparent about SWAP Force is how good it looks next to the previous installments of the series. The game boasts a brand new engine, supporting high-resolution graphics. Skylanders from previous games will likewise look as good as their new surroundings, so you don't have to worry about your favorite Stealth Elf looking drab in her new adventure. Oh, and I should mention that all skylanders new and old alike can jump in SWAP Force, an apparently much-requested feature!

But the biggest draw to SWAP Force is, of course, the new mechanic which Vicarious Visions has dubbed "swapability." The special SWAP Force skylanders can trade halves (the figures can literally be pulled apart, I believe magnetically), with the bottom controlling movement and the top controlling attacks. For example, we were shown two new SWAP Force characters, MagnaCharge and WashBuckler (a fire and water skylander respectively). A portalmaster can create WashCharge from these two skylanders, a character with the strong cutlass attacks of WashBuckler, but with the speed and agility of MagnaCharge. These bottom halves will be needed to visit special areas (e.g. a flying area will require the bottom half of a SWAP Force character like BlastZone to traverse), much like how certain elements were required for areas in previous games. So what do you guys think? Can you feel those hooks digging deeper in yet?

Skylanders SWAP Force is due out Fall 2013 on Xbox 360, PS3, WiiU, Wii, and 3DS. It should support the standard 2-player local co-op as seen in the previous games. You can check out the trailer below.

Update - Full presentation is viewable below.