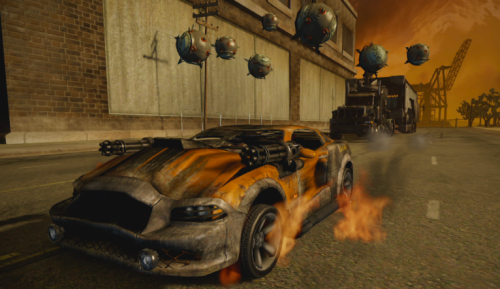 TM2 was one of the highlights of my PSOne experience. Released back in 1996, it features a cooperative tournament mode, and is well worth checking out. TM: Black also features solid co-op. The TM reboot doesn't have a very robust co-op mode, unfortunately.  It's in there, but it's brief. You can finish it in an evening. The game as a whole is solid, especially if you're into online versus modes. Check out our Co-Op Review for all the gory details.

It's interesting to see the evolution of a series that's been around for almost two decades. Check out this commercial for Twisted Metal 2.  It's pretty much the best thing ever.

Good stuff. The total package will eat up about 3.7 GB of storage space. Purchasing these four games as a bundle will cost you about eight dollars less than if you were to pick these games up individually. Buckle up and enjoy the ride.