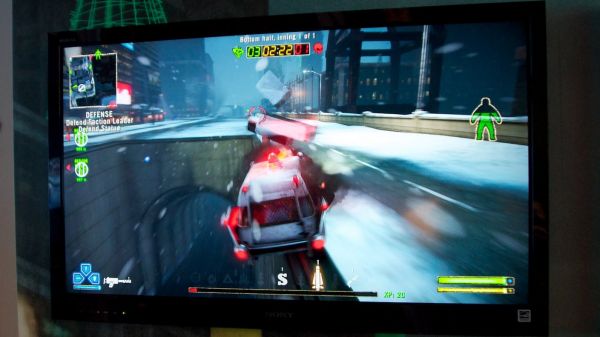 On the third day of E3, Nick and I had a joint appointment at the Sony booth/building.  He got some hands-on time with Resistance 3 and we both played a co-op round of Uncharted 3 (preview forthcoming).  But what really piqued my interest was the Twisted Metal re-boot.  The first Twisted Metal came out when I was in high school, and I was curious to see how the re-boot would handle the series.

We were ushered into a large area where two teams of players could face off in Twisted Metal's twisted take (get it) on Capture the Flag.  Since it was an 8 on 8 match I jumped right in, little-placard-explaining-the-controls be damned.

I played as Meat Wagon, an old-school ambulance (think Ecto-1), and Junkyard Dog, and big tow truck.  I felt myself instantly transported back to 1995.  The game felt retro, from the controls to the way the vehicles handled.  Both of my rides had signature specials.  I could launch a gurney strapped with explosives (and a human being) with Meat Wagon.  Junkyard Dog could sling cars at other players with its tow hook.  There were civilians and pedestrians crowding the streets, but they were so much fodder for the sixteen road warriors hell-bent on slaughter.

In this Capture the Leader mode we had to capture a faction leader (go figure), drag him behind our car to a faction-leader-powered missile launcher, throw him into a furnace or meat grinder at the back of said launcher, then guide a giant missile into the opposing team's statue.  Or at least that's what I surmised as I roamed the streets, eager to blast anything that moved.  I had a hard time finding the core action area.  Luckily for me, there were plenty of other players who didn't really know what they were doing.  Each side took turns playing offense and defense.  I'm sure if I had more time with the game I could have gotten a taste for the controlled chaos, but all I really experienced was chaos.  I had a blast, either way.  And we won, which was nice. I noticed little things as I rumbled around the multiplayer map.  There were destructible environments, multiple levels, and plenty of fan service.  Sweet Tooth's ice cream truck turned into a robot, so I rammed that.  It didn't go well for me.  That's why someone created respawns.  My passenger would hang out of the vehicle and launch things like RC car bombs.  I saw a clown on a motorcycle throwing chainsaws.  I had to ram that guy.  Respawn city, population: me.  The rep mentioned three factions, the Clowns, Skulls, and Dolls, although I think there is a Preacher faction as well.

After our hands-on session was over we went upstairs to where we were given a boss fight demo.  Right before the demo a Sony rep mentioned something about  playing the entire single player campaign with another person.  We asked for more information, but they were mum on the topic.

The boss fight was pretty slick.  Once again, the player had to find the opposing faction leader, (in this case it was the Dolls), destroy their vehicle, capture the driver, drag them behind your car, and catapult them into the giant missile launcher's gaping maw of death.  This would then fire a missile at the boss, which was a humongous robo-doll.  The thing was as big as a skyscraper and hovered in a nearby ravine, firing missiles and all sorts of other death devices at the player.  Each time the boss got hit by a missile it got angrier and fired even more missiles and even more death devices.  After a few direct hits the battle was over.  There were some other cool things in there, but I'm sure you don't want me to spoil an entire boss fight.

Anyone who is a fan of the older Twisted Metal games will be right at home behind the wheel of this upcoming car combat game.  It looks as if we may be getting a whole co-op campaign, as well.  Twisted Metal will be out exclusively on the PS3 this October 4.