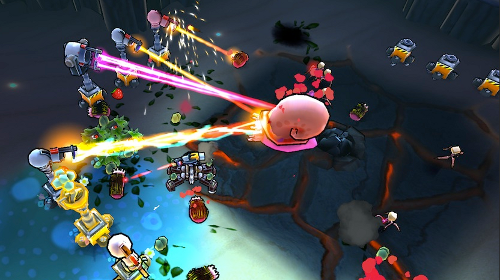 New from indie studio Elefantopia, McDROID is a sci-fi arcade game fused with real-time strategy elements that sports both single player and co-op play. Way out in the unexplored edges of space, McDROID's shuttle collides with some debris and crashes on an uncharted planet. The surface is infested with monsters, of course, so McDROID has to fight for survival while gathering materials to repair the ship, heal the planet, and figure out what sort of conspiracy is brewing beneath the surface.

Really, though, McDROID is a game about strawberries. The modular robot is one heck of a farmer, and by growing, protecting and harvesting strawberries, players can stock up on gold to build new structures. Co-op play allows up to four players to take on tasks together in both the main campaign and survival modes. The strategic possibilities are vast, so expect to see playing styles that range from turtling to berserking to smartly deploying experimental machines and talking lasers to take care of the killing. The McDROID developers stress that the game is infused with a strong love of classic games, especially R-TYPE and Dune 2. Oh, and the music? Acoustic rock songs inspired by the 60s. Elefantopia doesn't mess around when it comes to nostalgia.

McDROID is currently available for Windows, Mac and Linux.