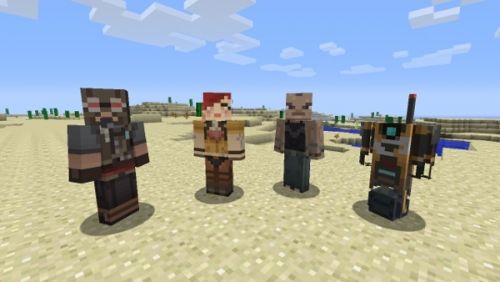 Gearbox dropped the word that some of their most beloved characters would be making an appearance as selectable skins in Minecraft: Xbox 360 Edition’s next Skin Pack DLC. For some wanting to see the Borderlands 2 and Minecraft connection come full-circle, here is your chance to own it.

It’s one thing to go around shooting talking robots and collecting strangely named loot with a group of close co-op buddies. However, to mine various chunks of rock, build brick houses, or even fall off cliffs while riding pigs isn’t something we saw coming from the Borderlands universe. Creepers do make an appearance in Borderlands 2, but this is the very first time Gearbox shows up in Mojang's territory. Just a sample of the future Skin Pack 4 DLC will include the original cast of Vault Hunter’s: Mordecai, Lilith, Brick, as well as the minion-ordering Claptrap (finally, he’ll be able to ascend staircases). All these and more will be available for everyone's growing Skin Pack collection very soon (most likely for the normal 160 MSP price tag), though the date has yet to be set. Hopefully in the near future we’ll hear more about both the upcoming Title Update #9 and the full Skin Pack 4 list too.