Ultratron is a port of an indie PC game. It sets itself apart from the other dual analog shooters available with a distinct look and a sense of purpose. Players progress through 40 levels of robotic enemies, with challenge waves and bosses alternating every five levels. In co-op, players share the same shield pool. So while you have double the firepower, you also have double the chance to chew through your precious protection. Die, and you start over. The waves become punishing, quickly. We’ve only made it into the late teen levels so far. If you think checkpoints and saves ruined the challenge of gaming, this is a game for you. 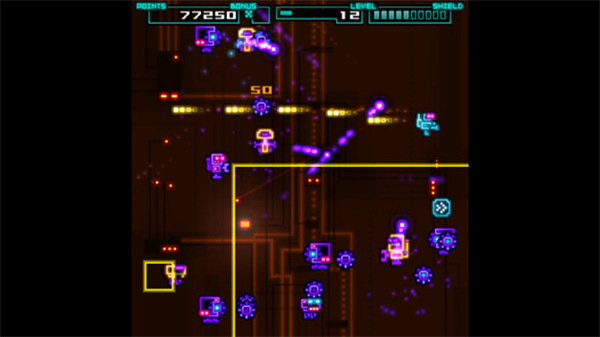 Ultratron is an odd one. Tam hated it because of its difficulty and having to start over every time. I felt challenged and wanted to keep trying again to see how far we could make it. Many of the Community Games have no purpose; you just play until you die. I appreciated that Ultratron had a finite goal, even though we’re not good enough to get to it yet. For co-op, you’re going to need a partner who welcomes a good challenge and can appreciate some of the frustrations that go along with a game that would have fit in well in an early 1980s arcade. This was the first Community Game that I bought and the only one that I can unconditionally suggest you try out.