Take Gears of War 2’s Horde Mode, cross it with a strange Missile Command/tower defense game, and you have Endless Swarm. Players build and manage ground towers to protect two factories from wave after wave of an incoming aerial alien onslaught. Waves becoming increasingly challenging, culminating in a boss fight every 10 levels. Then the difficulty drops and you start building back up again. Players earn resources from their factories to build and repair towers. Over time, players gain energy that can be used to fire three super powers (global repair, global shield and nuke). 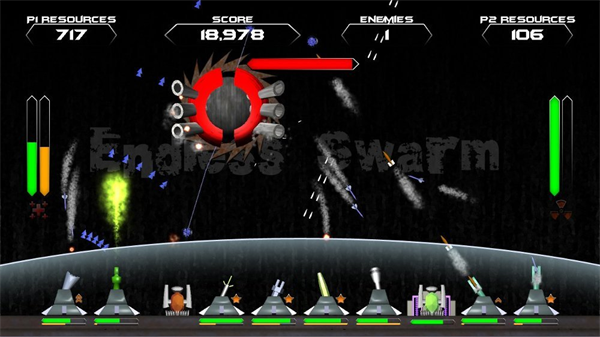 The developer delivered an interesting experience that takes a different approach to an old genre. Endless Swarm tries to be a good game, which is more than can be said for many Community Games. It suffers from a lack of depth though. Players can max out their defense towers relatively quickly, after which it lost much of its appeal for us. We both felt that the excitement of a tower defense game comes from building towers, not just repairing them. I doubt that it’s deep enough to keep players interested for more than a couple of attempts.