Nuke Your Neighbor is a Crazy Eights card game variation (think Uno). Players attempt to be the first to discard all their cards. Many of the standard special cards one would expect are present: skip, give two cards, give 5 cards, play again and multiple wild cards. A unique feature of the game is the last card battle. Whenever a player reaches their last card, a series of buttons appear on the screen. If the team who has the last card enters the button combination first, play continues as normal. If any opponent enters it first, the player with the last card is dealt two additional cards, forcing the round to continue. 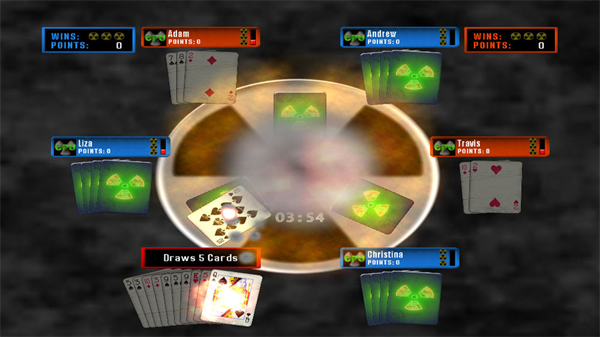 This game’s special feature is also its fatal flaw: the last card battle. Playing well or developing a working strategy with your partner can just be thrown out the window thanks to quick button punching. We found beating the computer to be a snap, at least up through the hard difficulty. By constantly winning the last card battles, the game becomes controlled by the person with the fastest fingers, rather than the team with the best card skills. This feature breaks what is otherwise an entertaining game.