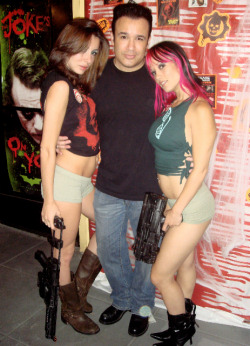 Clearly it pays to be a Voice Actor, so we asked him some questions about that...and toys.

Katrina: The three in one Special; How did you get your start in voice acting? Do you generally prefer to do acting, or voice overs? Which role do you relish the most in your career?

Carlos:Starting out as a performer I found that versatility can equal employment. Voiceover interested me from a performance standpoint as well as being a fan of animation, games and pop culture. As much as I enjoy stage and on-camera, there's a wonderful freedom to voiceover that can't be compared. As for the role I relish the most in my career, Dominic Santiago is hard to beat.

Katrina: As an avid toy collector, how do you feel having Dom – and in a sense, YOU – as an action figure? Does toy-Dom ever get his proper voice when you pass him on the shelf at home?

Carlos:I mentioned this recently to fans at New York Comic Con. For a life-long collector, getting the Dominic Santiago action figure was surreal. One of those things I'd always hoped for. Toy-Dom gets shown off, made to speak and played with all the time.

Katrina: After looking at your impressive collection and noticing quite a few comic book figures there – who would win in a fight between Spider-man and Batman? How about a fight between Dom and Marcus?

Carlos:As much as I love Spidey, Batman would win. I like to think that Marcus would want Dom to be a really formidable opponent but he would never let him win.