The final game of the show was Wolfenstein.  The game unfortunately was a hands off demo, so I didn't actually get to play it.  The game immediately is going to get comparisons to Call of Duty: World at War in both visual style and gameplay.  But like the previous Wolfenstein game, there's a heavy sci-fi element here.

You play as familiar character BJ Blaskowitz fighting the Nazis. In the demo we saw the developer work their way through a mansion, killing Nazis, and collecting treasure along the way which can be used to buy and upgrade weapons. Soon the ordinary mansion turned upside down as "an event" occurred. While they were mum to say exactly what happened, we witnessed random losses of gravity, strange blue explosions, and lots of confused folks as the player tried to make his way out of the building. 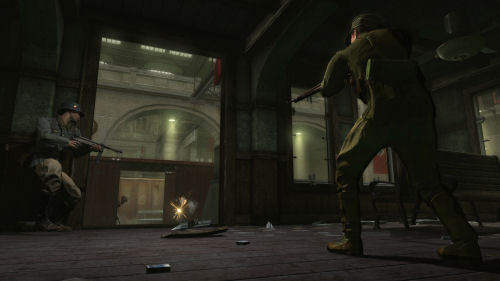 After that we were shown a later level in which BJ has something called "Veil" powers. Using this he can enter an alternate dimension, think Legacy of Kain: Soul Reaver, to solve environmental puzzles and plan attacks on the enemy. In one example we saw that entering the Veil would show a hole in the wall where players could go through, which otherwise isn't there in normal mode. Different powers would be unlocked over time, for instance the ability to slow down time, and these could also be upgraded by using the in-game treasure system.